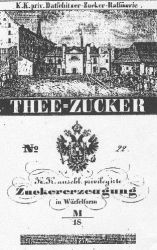 In the 1920s, after the end of the Napoleonic wars, attempts were made to revive sugar production from sugar-beet in the Habsburg Monarchy. The first ever sugar factory of modern times in the western part of the Monarchy was established at Kostelni Vydri near Dacice in 1829. It was founded by brothers Tomas and Frantisek Grebner (from Württemberg), who had finished their studies in sugar-beet processing in Germany, and especially in France. However, the soil in the surrounding area of Dacice was not very suitable for growing sugar-beet (about 500 m above sea-level), soon the sugar factory was in short supply of quality raw material and it gradually began to substitute it with sugar beet molasses made from potatoes. Therefore, the sugar factory at Kostelni Vydri stopped sugar-beet processing as early as 1832. 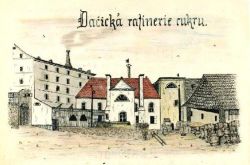 The first sugar refinery in Moravia

However, dealing with the business failure of the Kostelni Vydri sugar factory, F. Grebner’s entrepreneurial activity did not finish. In 1833 he set up a sugar refinery in one of the buildings directly facing the square at Dacice. Later, the sugar refinery was extended to include other adjoining buildings. Initially only cane-sugar was processed, being transported via Vienna from the Italian province of Trieste, and thus it became the first sugar-cane refinery built in Moravia. After 1844 only sugar-beet, being exclusively sourced from domestic available resources, was processed. The refinery brought the town a revival of economic activity, bringing the skills of a number of professionals and creating new jobs. However, in 1839 the enterprise ran into financial trouble, and in the spring of 1840 Grebner’s associates sent for a new director from Vienna, Jakub Krystof Rad (Jacob Christoph Rad), a native of Rheinfelden, Switzerland.

The arrival of the new director marked the greatest period in the company’s history, which culminated in the invention of the first sugar cube and the machine used for its production. First J. K. Rad expanded the existing production premises, acquired new machines, and in 1842 he also put the first steam engine into production in town. Under his management, the company was thriving. The sugar from Dacice was supplied to South-west Moravia, South and East Moravia, and the Austrian borderland; the sugar from Dacice was also sold in Vienna, Pest, Lvov and Brno.

To make better use of some products of the sugar refinery and to improve its economy, director Rad established a candied fruit, sweets and chocolate manufacturing plant and he also arranged for his wife, Juliana, to become involved in production in 1841.

The inconvenient shapes of sugar (cones, hats or loaves) made J. K. Rad come up with the invention of sugar cubes. The shape of the sugar manufactured till up to this time was of little practical use among tradesmen and households; loaves of sugar were not packed easily and became damaged before use. During sale one always failed to cut off the exact quantity of sugar; there was a lot of waste involved. Additionally, the long drying of sugar loaves was a rather long running process.

Up until 1843, every housewife, wishing to sweeten a meal, had to get hold of a sugar nipper to cut off a small piece from a big sugar-loaf. A moment’s absent-mindedness was sufficient to cause injury. One day of August 1841 such an incident also happened to Mrs. Juliana Rad, who had cut herself in her finger tip trying to cut into a huge lump of sugar. After the incident she made an appeal to her husband, and other officials of the Dacice sugar refinery and those present at lunch, to find a way how to eliminate the difficult cutting and splitting of sugar. She herself suggested producing sugar in the form of cubes that are easy to count and stock. 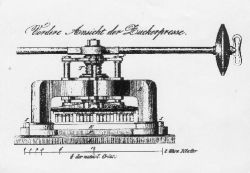 She was certainly pleased to receive the little box her husband gave her in autumn of the same year. There were 350 white and red cubes of sugar inside. Rad made a sugar press, and by the end of 1842 he asked the Court Chamber in Vienna to have the privilege of manufacturing cubed sugar at Dacice. It was granted to him on January 23, 1843.

In the autumn of 1843 the Dacice refinery started to make cubed sugar intended for trading in the market. For the first time, cubed sugar called “tea sugar” appeared in Vienna, too. A little parcel containing 250 sugar cubes weighed one pound (around 0.5 kg) and resembled a little Chinese tea box in appearance. The patent rights for sugar cube production were soon bought by Prussia, Saxony, Bavaria, Switzerland and England. An advanced form of Rad´s invention is used by sugar refineries all over the world.

Sugar powder obtained from incompletely dried white sugar-loaves by use of a cutting machine was passed through sieves and filled into a brass plate holding a total of 400 holes shaped in the form of a square, and it was then imbedded on a lower clear brass plate. Both the plates were set forward under a pressing machine where shape forming elements mounted onto a press head of the machine were forged into the holes of the brass plate by means of a spiral spindle and a rotary beam. Thereby the space volume of sugar fed into the holes was reduced by around half. Eventually, machine-pressed sugar cubes were pushed out onto a wooden board, which was then placed onto shelves in a drying house where they were dried for 10 to 12 hours. Then the sugar was packed in little parcels, each weighing one pound. By means of 6 pressing machines, it was possible to make up to 1120 kg of cubed sugar in daily business at Dacice.

The refinery wound down but the sugar cube remained intact

In the first half of the 1840s, external conditions affecting the economic situation of the refinery deteriorated, and the sugar cube production Rad was pinning his hopes on brought no expected improvement. In 1846 Rad left Dacice together with his good-sized family. (The Radas has a total of 16 children, seven of whom died soon after; their descendants, however, live in Switzerland and Austria). The sugar-refinery continued operations until 1852 and then production ceased. In 1863 its building was demolished, except for the cellars. In parts of the area above the cellars, the theatre and dance hall had been erected; it has been preserved in its structure until these days.

In 1983, a small granite memorial to sugar cube was built in Dacice to commemorate Mr. Rad´s sweet invention. It stands in a small park near the Renaissance tower of the Church of St. Lawrence.

In 2003, a memorial plaque was unveiled on the outside of the building of the former refinery. The Dacice Municipal Museum and Gallery houses a permanent public display devoted to the production of the Dacice sugar-cube and the white-sugar refinery at Kostelni Vydri.